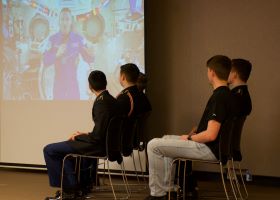 Colonel Andrew Morgan, a NASA astronaut aboard the International Space Station, administered the oath of enlistment Wednesday to six students at Waynesville High School through a two-way video conference call–all while in Earth’s orbit.

Army officials said it was the first ever enlistment ceremony performed from space.
Waynesville studets Cameron Scott, Gavin James, Arthur Perry-Hardy, Joshua Scheuner, Tyger Cole, and John Cotto all joined the Army for their own reasons, but none anticipated the opportunity to meet Morgan.
Cole said, “Growing up, I was always fascinated about space, and I always wanted to work with or go to space. It means to a lot to me.”
Four of the six students have parents who work on Fort Leonard Wood.
To honor all students – both WHS and area high schools – going into all branches of the military, WHS will host the Second Annual Community Salute to Service at 6:30 p.m. Thursday, April 23, in the Waynesville High School gym to recognize students from area high schools who are going to serve in the military following graduation.
Community Salute to Service is free and open to the public.