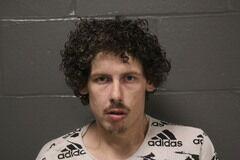 A man from Fairdealing is facing a list of charges following his arrest in Camden County. The investigation began when a woman reported that her car was stolen by her roommate while she was in the hospital in September. She told police that the roommate took her computer, the vehicle title and car and drove it to the Poplar Bluff area and refused to give it back. On Friday, the victim told police that another man called her and said he had her car, and wanted $500 and expenses to return it, and that Chance Hubbard would drive it to her.

The owner coordinated with Osage Beach Police who set up a plan to intercept the vehicle. The car was pulled over in Osage Beach on Saturday, and Hubbard was taken into custody. When he was searched a bag with heroin, and drug paraphernalia were seized. The stolen computer was also recovered from the vehicle. Hubbard is charged with stealing a motor vehicle, receiving stolen property , possession of a controlled substance and unlawful possession of drug paraphernalia. His bond was set at $75-thousand-dollars.