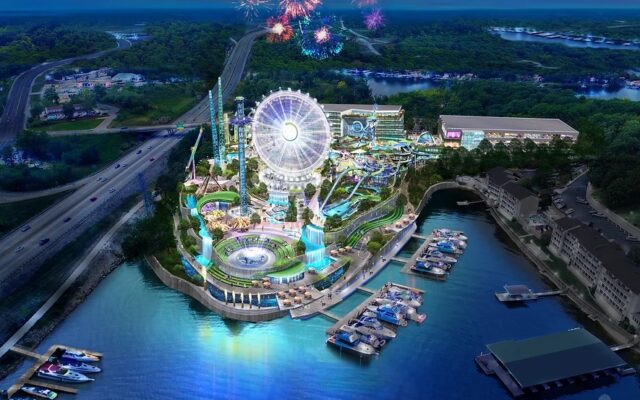 Big Thunder at Lake of the Ozarks yesterday (Thursday) announced plans to build a new $300 million tourist oasis next to the Grand Glaize Bridge in Osage Beach.

‘The Oasis at Lakeport’ will feature year-round entertainment, offering 20 acres of amusement rides and attractions, along with hotels, restaurants, an amphitheater, a marina, and a boardwalk. Amusement offerings will include roller coasters, thrill and family rides, and a 200-foot-tall observation wheel.

The family resort and entertainment destination plan to break ground in the first quarter of 2023 for an opening in summer 2024 at the old Lakeport property acquired by Big Thunder Marine in 2021 at Highway 54 and Jeffries Road.

Osage Beach Mayor Michael Harmison said the Osage Beach community has been asking for more family-friendly entertainment options and said he is proud to work with SkyView Partners and Tegethoff Development to help deliver such a significant investment to Osage Beach. This world-class team of developers has a proven track record of providing high-quality developments and attractions across the U.S.

Missouri Lieutenant Governor Mike Kehoe said The Oasis at Lakeport, upon its completion, is estimated to generate more than 500 jobs and bring 500,000 visitors to Missouri.