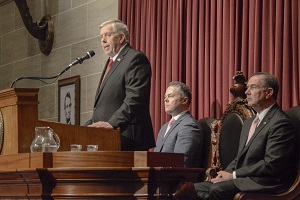 Some state lawmakers are not on board with the idea and say such measures would violate the Second Amendment. His 30 billion dollar budget plan unveiled also includes adding four more Highway Patrol troopers to work on St. Louis highways and one million dollars to protect crime victims and witnesses during investigations.