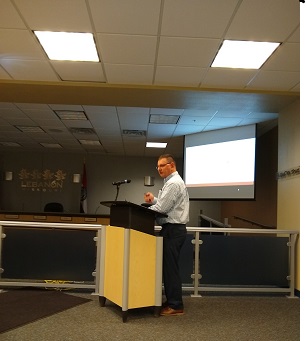 The project includes improvements to treatment and electrical systems and buildings. According to the proposal construction could begin this spring with 12 to 15 months to complete. Shockley said they had 4 bidders on the project, with a million-dollar gap between the highest and lowest bid. The total cost of the project is about $6.5-million, including SCADA, Fencing, asphalt, and concrete. The city has budgeted $6-million. Shockley said the capacity could serve the city for as long as 20 years, but a major industry expansion could change that.
Another project presented for future approval is improvements to the Goodwin Hollow Lift station on Gateway Road. Shockley said the station pumps about 50 percent of the sewage to the main plant and was the original treatment plant and was built in the ’50s. Improvements would include rerouting the mainline, construct a new flow structure. $795-thousand is the estimated cost, which is more than the $650-thousand expected. Construction expected to take about 3 months. The city will be seeking financing for both projects, which will be paid back in 15 to 20 years. Another project presented will include cleaning and painting water towers, including the Spiller, Glencastle, Bowling and Downtown water towers. The total projected cost of the water tower projects is just over $749-thousand-dollars.