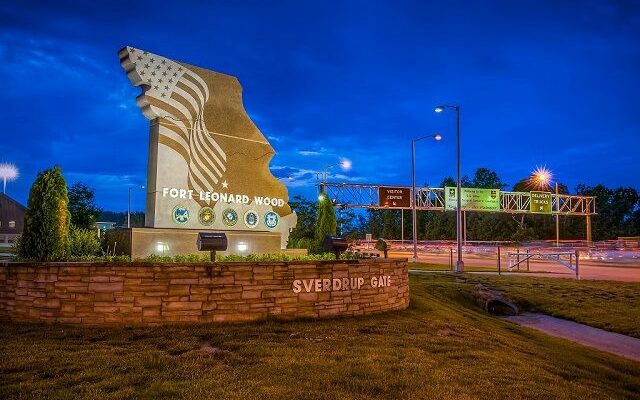 The U.S. Army Chemical, Biological, Radiological, and Nuclear School unveiled a new brick walkway and sculpture during a dedication ceremony held Monday at Fort Leonard Wood’s Chemical Memorial Grove. Throughout the grove, which serves as a place to honor fallen chemical Soldiers and Gold Star Families and to inspire service to current and future generations, the new brick walkway consists of more than 1,800 donated bricks bearing the names of all recorded Chemical Corps Soldiers who have given their lives in combat during conflicts dating back to World War I. The new sculpture features a set of crossed retorts — the Chemical Corps insignia — and sits atop two columns that were placed near the entrance of the memorial. Inside the sculpture is a time capsule holding items selected by current leaders from the C-BURN School and the 3rd Chemical Brigade. The capsule is scheduled to be opened on the 150th anniversary of the Chemical Corps in 2068. To make the ceremony more special, family members of Sgt. 1st Class Jeremiah Johnson, who was killed in action on Oct. 4, 2017, in Niger, while attached to the 3rd Special Forces Group, and Master Sgt. Hugh Whitacre, who died Nov. 26, 1950, in the Republic of Korea, was the first to walk through the new archway and was escorted along the path to the bricks bearing their Soldiers’ names.
The ceremony was concluded with the playing of taps by the 399th Army Band and the traditional lone piper fading into the distance to the tune of “Amazing Grace.”