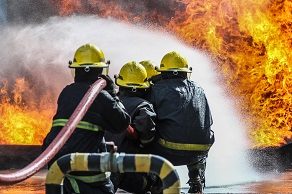 A Lebanon home was destroyed by fire this morning. Lebanon Fire Chief Sam Schneider reports that fire fighters responded to the 500 block of Murphy Street just after 5am.

The residents were out of the house when fire fighters arrived….

Chief Schneider said the Red Cross Disaster Action Team responded to offer assistance to the family. No injuries were reported. Lebanon City Fire received mutual aid from Lebanon Rural, and Mid County Fire provided coverage at the fire station. Schneider reminds all residents in the Lebanon city limits that if you don’t have working smoke detectors in your home, to call fire station one at 532-2104 for an appointment and they will be happy to provide and install them for you.