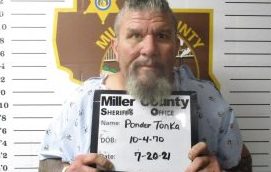 Charges against a 51-year-old Preston man who authorities believe was involved in a shooting that killed 25-year-old Blayne Curley of Camdenton have been dropped. The Miller County prosecutor’s office filed charges of first-degree assault and armed criminal action against Tonka Way-Con Ponder in July of last year following a shooting involving two biker gangs at the Casablanca Bar on the Bagnell Dam Strip.

Four other people were hurt in the shooting, including Ponder.

Ponder’s case had been moved from Miller County to St. Charles County in December of last year on a change of venue.