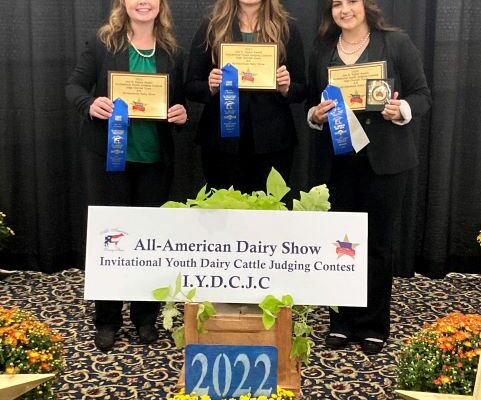 The team of Payton Nix, Lila Wantland and Whitney Yerina finished ahead of Florida and Kentucky to win the contest. “All three team members finished in the top 20,” said Karla Deaver, University of Missouri Extension 4-H youth development specialist and co-coach of the team. “They were very consistent across breeds, and that gave us the edge.”

Nix, daughter of Keeland and Lacy Nix of Mountain Grove, had an incredible contest, Deaver said, finishing as third high individual overall. Nix was second high individual in Ayrshires, ninth in Brown Swiss, third in Holsteins and fifth in oral reasons. She talked a perfect 50 in Ayrshires.

Yerina, daughter of Brett Yerina of New York and Katie Dixon of Phillipsburg, Mo., was 10th high individual overall in the contest and 12th in Holsteins. Wantland, daughter of Jeff and LeeAnn Wantland of Niangua, finished 19th overall and was seventh in Ayrshires and 11th in Guernseys.

The team was second in Ayrshires by 1 point. They were also fourth in Brown Swiss and Holsteins, fifth in Guernseys and sixth in oral reasons. “This contest allows us to build momentum going into the national contest on Oct. 2,” said Deaver.